The Duchess returned to a favorite designer and familiar silhouette for today’s royal tour activities. Kate was in a bespoke piece by Catherine Walker as the family left Poland and traveled to Germany, where they will spend the last three days of the week-long tour. After arriving the Duke and Duchess met with Chancellor Angela Merkel. The two enjoyed a view of Berlin from several stories up.

They then went to the renowned Brandenburg Gate, symbolizing unity and freedom. More about the monument’s significance comes via Visit Berlin:

The site came to symbolise Berlin’s Cold War division into East and West – and, since the fall of the Wall, a reunified Germany.

… When the [Berlin] Wall fell, 100,000 people gathered here for the Brandenburg Gate’s official opening on 22 December 1989 – and soon afterwards, crowds thronged the area to celebrate their first joint New Year’s Eve in this once-divided city. Today, more than almost any other of the city’s landmark sights, the Brandenburg Gate symbolises a reunited Berlin.

They also did a walkabout at Pariser Platz, adjacent to the Gate. A crowd of around 2,000 people came to the city centre close to where the Berlin Wall stood to greet the royal couple.

Some of the people in the crowd even gave the Duchess a German lesson when she asked them how to say ‘What is your name in German’.

A friend, Christin (known to many readers as Packham Gown on Twitter), was in Berlin and says ” I have no idea how Kate endured it under this coatdress,” noting the temperature was about 30℃, that is roughly 86℉. Christin shared this video of Prince William greeting people and says he is a World Champion in shaking hands.

William and Kate also visited Berlin’s Holocaust Memorial and toured the Holocaust Museum. (NOTE: I haven’t had time to get photo/info for this portion of the post but did want to mark that Kate and William were there. I hope to supplement later this afternoon or evening.) The Duke and Duchess then traveled to Strassenkinder, a charity supporting young people. The charity provides care for more than 200 children, including assistance with welfare and education, as well as things like sports. While speaking with some of the teens Kate and William complimented them on their English skills.

Many of the young people were delighted by their time with William and Kate. There were lots of hugs. Everyone gathered for a group photo. You also see the President’s wife, Elke Büdenbender, in the photos. She is a judge in Berlin. More about the afternoon visit from Richard Palmer’s Daily Express story:

William and Kate drank Darjeeling tea served in china cups, while the President and his wife took coffee. It was designed as a fusion of the best of Britain and Germany Now to our look at what Kate wore for day 3 of the royal tour, an elegant Catherine Walker coat atop a coordinating lace dress with scalloped hem. The coat really is a gorgeous shade of blue; it features a fitted bodice and full skirt, bracelet length sleeves, and oversized self-covered buttons.

From a British Vogue story:

All dressed in varying shades of royal blue, the young family made the case for colour coordinated ensembles rather credibly. Prince William’s tie and suit matched that of his family’s hue in a sophisticated way, while Princess Charlotte wore the blue equivalent of the outfit she donned when she arrived in Poland earlier this week: a floral dress, matching bow in her hair and Mary Jane shoes worn with white socks. Prince George wore a short-sleeved pinstripe shirt and tailored shorts. Berlin Blue, or Prussian Blue, is a pigment that was first developed in Berlin in the early 18th Century, and became the lead colour for the Prussian Army and for other German military uniforms up until the First World War when grey became the staple.

The hue is also known as Cornflower Blue – the cornflower becoming a national flower in Germany thanks to tales of Queen Louise of Prussia, who fled Berlin as Napoleon pursued, and hid her children in a field of the flowers. Given that backstory, it seemed appropriate that Kate was surrounded by her children dressed in the same hue as they landed at Berlin’s Tegel airport. When seeing today’s look many of us immediately thought of the red coat worn when leaving Canada in July 2011, seen again at Order of the Garter last year.  The primary distinction between the two: the lapels. The red coat has shawl lapels, while the blue has notch lapels. We have a peek at the dress material in a few photos. 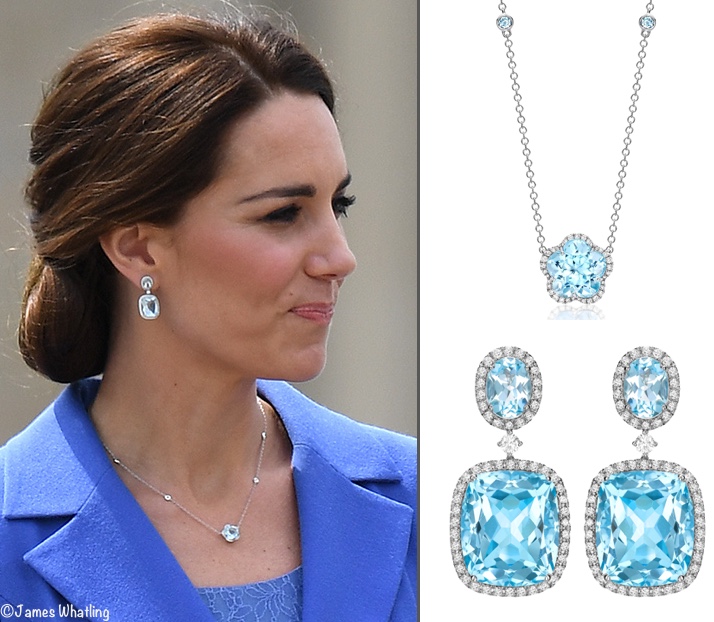 She wore a new necklace from the jeweler’s Eden Collection. It is the 18ct Blue Topaz and White gold style, featuring a flower-shaped blue topaz set in pavé diamonds (£1166). Kate also wore the Blue Topaz and Diamond Drop earrings in white gold (£2916).

The Duchess carried a new handbag, the Jimmy Choo Vivien Clam Satin Clutch. I believe the color Kate has is a one-off and unavailable elsewhere. The style is available at Selfridges ($705) in black, as well as a color called vintage rose. (Does anyone see that vintage rose paired with the praline pumps at some point in the future?)

A ‘thank you’ to Michelle of Perth Fashion for her ID of the bag.

We saw Kate’s Gianvito Rossi pumps make another appearance. The shoe is a signature style for the designer and part of every collection. Kate’s are the praline colorway; we show them at Net-a-Porter, where they are available in a dwindling mix of sizes.  They are also offered at My Theresa, but the sizes are limited. The shoe is $675 at both retailers.

We will be updating with many more photos and a bit more info, but wanted to get this first pass published.

A reminder that we’ll see you in a bit when Kate and William attend a birthday party for HM hosted by Britain’s Ambassador to Germany, Sir Sebastian Wood. The gala is at the Ambassador’s residence in Berlin.

For all of the details on what the littlest royals wore today, visit What Kate’s Kids Wore. We’ll leave you with what is arguably the cutest video of the trip, Princess Charlotte’s first official curtsy.