Hello and Happy New Year! I hope everyone enjoyed nice holidays and had a chance to relax and maybe rejuvenate a bit. Today we have a quick look at news of an exciting new designer collaboration, additions to Kate’s Calendar, a new poll asking for your opinion on the cocktail dresses worn by the Duchess in 2017, and a quick announcement at the end of the post.

We’ll begin with the news about a collaboration between two of Kate’s favorites: LK Bennett and Jenny Packham. Women’s Wear Daily revealed the news in a story published this morning, including word there will be 16 footwear styles and 5 handbag designs.

An interesting element of the announcement:

It will be a “here to stay” collection that will be permanently stocked across L.K. Bennett’s boutiques and on its web site, unlike the brand’s previous collaborations which were released as limited-edition capsules.

Now for the updates to Kate’s Calendar.

Now to our review of the semi-formal styles Kate wore in 2017, what many of us call cocktail dresses, pieces a notch above day dresses, styles that look like they belong at a party.

Our first design was worn in February when the Duchess attended a Buckingham Palace reception wearing the Erdem ‘Rhona Metallic Floral Lace’ dress. From our original post: “The piece is midi length with a round neck, pleated bodice, and skirt, semi-sheer raglan sleeves with a button cuff, self-belt, and hidden back zipper. The story of this frock is the fabric, a metallic lace in silver. In some photos, the fabric has a pink undertone.” While visiting Paris in March Kate wore an Alexander McQueen dress for a cocktail reception at the British Embassy. The sleeveless dress was done in a textured fabric, with a deep vee neck, and fringed trim at the neckline, armholes, and hem. 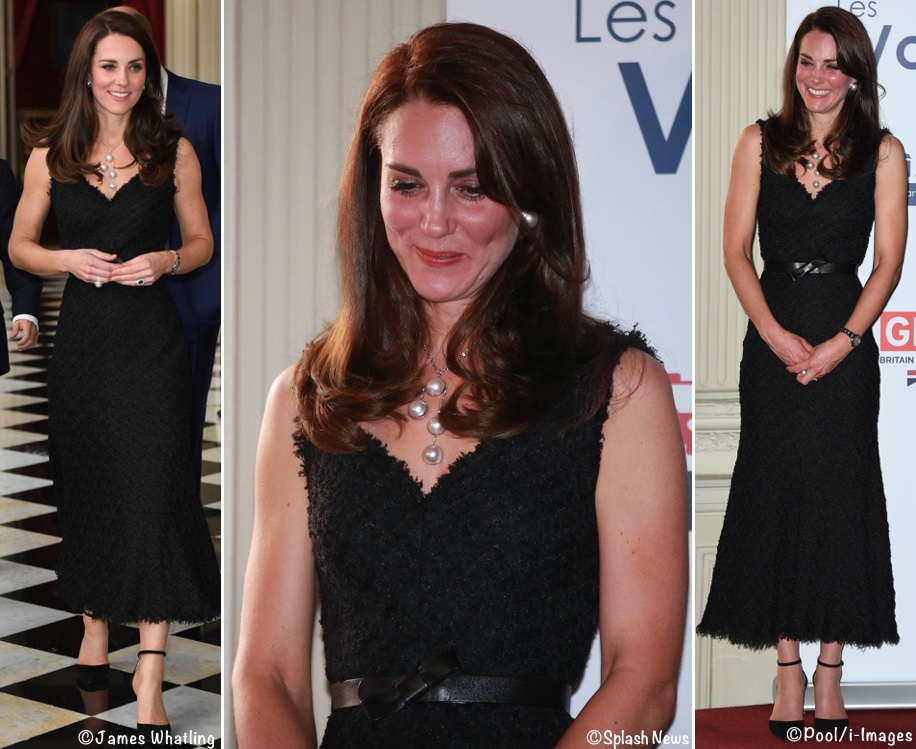 Kate opted for a design from a label we’ve not seen her wear previously, Marchesa Notte, when attending the premiere of 42nd Street in April of last year. The dress was a custom version of the Embellished Tulle Midi Dress in ‘claret,’ a piece from the label’s 2017 resort collection. The strongest design element was the silhouette; the nipped in waist and full skirt were reminiscent of Dior’s New Look from the late 1940s. These were achieved in part by the flexible boning, as well as reinforcement of the hem so the skirt holds “its voluminous shape.” For an evening cocktail reception in Warsaw, Poland Kate chose a piece by Polish designer Gosia Baczyńska. The midi-length sleeveless dress showcased a dimensional element, architectural detailing on the piece, portions of the dress that actually stood out from the body of the piece. The jagged edges and pleating created a look that was a departure from the Duchess’s more standard cocktail fare. We saw the Duchess in an Alexander McQueen off-the-shoulder style when attending a party at the British Ambassador’s residence in Berlin. Part of the spring ’17 collection, the Alexander McQueen Off The Shoulder Maxi dress is crafted from a silk/cotton material with a crinkly texture. This description was part of our original post: “The off-the-shoulder maxi-dress has shirring at the neckline, cuffs and waist, as well as a ruffle at the hem. There are also ties at the upper arm.” Our final piece in this category was also worn on the July tour, seen at a reception in Berlin. For this event, Kate wore a dress by German-born and London-based designer Markus Lupfer. The midi-length dress is from the brand’s pre-fall collection and it is called the ‘Teal Bird Pleated Arabella Dress.’ The lightweight chiffon material features a wild sparrow print, intricate pintuck pleating, and a high neck. I will confess I struggled with the red Alexander McQueen piece worn in Berlin as well as the McQueen dress worn to Pippa’s wedding. Ultimately I included the red McQueen because it was worn to a cocktail party, while I left out the wedding dress as I had a tough time seeing it in similar circumstances, as a party piece. Hopefully, no one is too disappointed about its absence.

For those voting “other” and leaving comments, I haven’t figured out a way to have the comments show as you make them. I will include a synopsis of them in the results post.

UPDATE: Many thanks to Josephine who pointed out an omission on my part; I forgot to include the blue Temperley Eclipse dress in the poll, worn in October for a Buckingham Palace reception. There was good feedback from people in the comments section about what to do going forward, and I think I will leave the poll as it is and include the Temperley in the day dresses poll. It’s not where I wanted it to be but it’s the easiest thing to do at this point. (Insert sad face here!) Our final part of the post involves a decision related to What Meghan Wore.

After the post here on Harry and Meghan’s wonderful engagement announcement, many of you asked if I would be doing a What Meghan Wore site. I can’t tell you how much I appreciate your many comments and emails about the way WKW is managed; they mean the world to me. Doing a site about Meghan is something I have thought about on and off for months. I was already helping a good friend (also named Susan!) who started What Meghan Wore in November of 2016. We’ve known each other for years, and she was kind enough to touch base ahead of time and see if I minded her using What Meghan Wore as a name; I said of course not, I was tickled she was creating something I knew would be very popular, and we’ve been speaking about WMW and corresponding constantly since then.

Susan has done a terrific job getting WMW up and running on Twitter, Instagram and Facebook. We have spoken frequently throughout the process and she has now launched the What Meghan Wore blog. Susan is dedicated to the same standards I have used with What Kate Wore and What Kate’s Kids Wore: approaching the endeavor with respect for Meghan and her role as she joins the Royal Family; keeping the focus on Meghan, following her style and fashion while avoiding tasteless topics and gossip designed only to draw an audience; using properly licensed photos in the blog.

As many of you know, I was leaning away from doing something related to Meghan’s style. But in speaking with Susan it seemed there could be a way to participate in a site without doing one of my own. We have been talking quite a bit the last few weeks and are happy to announce that I am going to be helping out on What Meghan Wore. This allows me to maintain and grow WKW/WKKW while also contributing to WMW. Meghan is an engaging, captivating personality with an amazing style that is a delight to follow. Susan is a bright, gifted writer with an eye for detail I wish I had, and an encyclopedic knowledge of Meghan’s background and fashion. WMW is very much her vision, her passion and her project; my role will primarily be in writing and helping out on social media. Many of you expressed concern in your comments that doing another site would diminish my work on What Kate Wore and What Kate’s Kids Wore; they will always be my primary focus. That is the beauty of WMW being Susan’s enterprise: she knows Kate and the Cambridges are my first love and first priority.

I hope you’ll visit us at the What Meghan Wore blog (which is really in its infancy), on the WMW Facebook page, as well as on Twitter and Instagram.

One more quick note: today we learned about a special TV broadcast, The Coronation, marking the 65th anniversary of the Queen’s coronation. The program includes a rare interview with HM. More from the BBC:

She also discusses the day in 1937 when, aged 11, she watched the coronation of her father George VI.

“I’ve seen one coronation, and been the recipient in the other, which is pretty remarkable,” she says.

A portion of the broadcast also looks more closely at the Crown Jewels used in the ceremony. The BBC documentary airs in the US on the Smithsonian Channel January 14th at 8pm ET.

Maybe this will come up tomorrow or later today in a post about the Sandringham church services, but Kate's hair looks to be quite a bit longer than it was on Christmas Day. I don't mean this in a derogatory way, but it seems obvious to me that she's had extensions put in. Anyone else notice this?

Don't know what my eyes were seeing in the pictures I saw on another site, but I see in today's post that her hair is the same! Carry on! ;)

A hard category to pick a winner for me. However I have gone with the black McQueen that Kate wore in Paris. To me this was an ultra chic look - the fabric, the styling, the accessories were all wonderful. Sophistication personified in my book. I did also love the Erdem and the Marchesa, but the McQueen was just that little bit more polished in the city of style - Paris.

Many thanks for running such an amazing site on WKW, and that’s fantastic news about WMW! What a great partnership!

Beach Blanket Bingo and Alfred Hitchcock. No, really, I'm not being unkind. Those were my immediate reactions to the red McQueen, and the Claret dress. Actually, my responses struck me as rather amusing, with no malice meant. Others had the beach cover up reaction, too, so I won't comment further. The Marchesa looks like a costume, and it wears Kate. She doesn't wear it -- it dominates and drowns her. It looks like a dress Hitchcock would put on Grace Kelly in "Rear Window" or would use in "Vertigo." Never been a fan of the "New Look" or tightly cinched waists and voluminous skirts. There's something oppressive and impractical about the style to me, since it's a very hard look to carry off for most women.Even tall, slender beautiful Kate can't quite manage it. I went with the exquisite and avant garde dress from the Polish designer. I still can't get over how it looks like a sculpture but also looks and acts like a dress, and she looks stunning in it. My second choice is the bird print. Loved the boldness and colors of the pattern mixed with a simple columnar design. Those two dresses are Kate at her best.

I voted for the silver offering. It was beautiful and I had forgotten all about it! The 42nd Street I liked the 40's throwback feel but those cap sleeves ruined it for me. And the dress she wore in Warsaw - I didn't care for the way the darts were pointy in her chest area. Very odd and suggestive looking to me, and not in a good way. However, the line of that neckline with the necklace selection was stunning I thought.