For tonight’s Action on Addiction gala dinner, the Duchess was in a piece we’ve seen before. The gala dinner is in recognition of Addiction Awareness Week, June 10-16. The event is designed to showcase the different elements of addiction and to engage people and families affected by addiction, as well as raise public awareness. Below, Kate being escorted into tonight’s gala under an umbrella by Lord-Lieutenant of London Sir Kenneth Olisa. The Duchess has been the organization’s royal patron since January 2012. Action on Addiction is the only UK addiction charity working across all the areas of research, treatment, family support and professional education. In his People story, Simon Perry reports that

“Action on Addiction is ….something that she spoke about with locals in Cumbria on Tuesday. Simon Morsby, who has recovered from drug use and is now part of the Cumbria Drug and Alcohol Service, told PEOPLE, “I felt I could have talk to her for an hour and she would have wanted to do so too. I was really impressed.”

Tonight’s function was hosted at London’s Spring restaurant by the charity and restaurant owner and head chef Skye Gyngell. I believe we see her below with the Duchess. Before the dinner, Kate chatted with former Action on Addiction clients Jay Otty and Melanie Bennett, who worked on tonight’s meal.  The Evening Express reports that Mr. Otty “…has been sober for nine years after participating in the charity’s self-help and addiction recovery programme, and now works as front of house staff at The Brink – a dry bar in Liverpool.” The Duchess visited The Brink bar in 2012 when she spent a day in the city. The Express piece also notes that Ms. Bennett “…was helped by the charity’s recovery programme after she struggled with substance abuse following the death of her father.”

Simon Perry updates us on tonight’s menu: “The dinner started with a salad made with radishes, carrots, broad beans, stracciatella, and verbena oil. After a main course of River Test trout, lemon cake with elderflower cream and gooseberries was served for dessert.

Kate delivered opening remarks at the event. Below, the Duchess on her way to the podium. Here you see her with Graham Beech, the charity’s Chief Executive. Kate spoke about the organization and how her time as its patron has inspired other elements of her work.

Action on Addiction was one of my very first patronages, and as such, it is very close to my heart. And in some ways, it was the catalyst for my interest in early childhood development too. It is vital that we support everyone who cares for children in those formative years, especially if we want to help with the inter-generational cycle of addiction.

What’s remarkable about Action on Addiction is that it goes beyond helping those who are suffering on the courageous journey into recovery – it also lends direct support to the children and families affected by addiction – for as long as it takes.

You can read the entire text of Kate’s speech here. More from the Evening Express: “Wood – who has been open about his struggle with alcoholism – and his wife Sally were seated at top table with the duchess.” after the dinner the musician tweeted that “It was an honour to speak at the Action on Addiction gala this evening with HRH Catherine, Duchess of Cambridge.” He also shared “Some words from my speech tonight ~ “When you take care of yourself you can achieve anything.”
Also attending the function, actress Claire Forlani (Meet Joe Black) and her husband Dougray Scott (Mission: Impossible 2). Action on Addiction thanked Kate, saying, “We are extremely grateful to the Duchess of Cambridge for supporting the Addiction Awareness Week gala dinner tonight and for her powerful speech: ‘Sadly, for many who are suffering with addiction, they just don’t receive the help they need early enough.'” She was in a dress by Barbara Casasola that was first worn in July 2016 for the Art Fund Museum of the Year awards. From our original post: “The Tribal Dress is crafted from a stretch jersey material, a viscose/poly blend that hugs the figure. It is an off the shoulder design featuring multiple fabric panels, a front zipper, wide waistband, three-quarter sleeves, and a fluted skirt.” 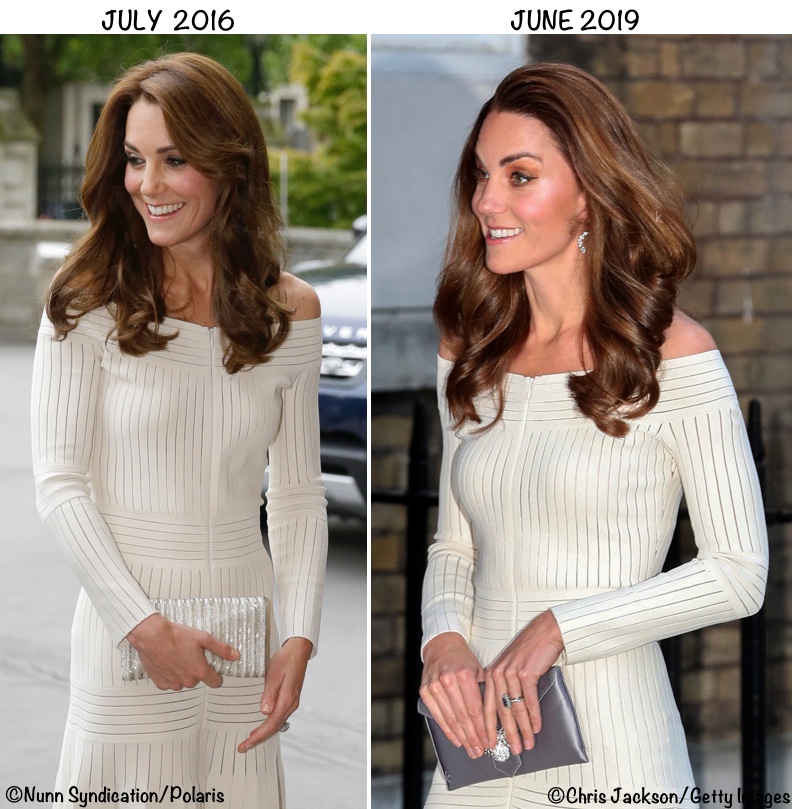 While not everyone was crazy about this when first worn, it was very popular, thus my use of the term fan favorite in the post title.

Kate also brought back her Dégradé Glitter Pumps ($725) that were first noted at the BAFTA awards in February. The shoe is actually the classic Jimmy Choo Romy 100 style, embellished with shimmering crystals.

Kate carried a new handbag, the Charlie Classic Silk Clutch in the Steel colorway (£205, roughly $260 at today’s exchange rates). The piece is 100% silk with a jeweled clasp featuring an ornate bee.

Many thanks to Laura for her speedy identification of the bag.

Kate also wore the Kiki McDonough ‘Lola’ Blue Topaz earrings, a pair we’ve not seen for several years as pointed out by Gabi. In unrelated news, Kate will make an appearance on the BBC children’s show Blue Peter tomorrow (Thursday, 6/13), where she will launch a competition for children to design a sculpture for the garden she is working on for RHS garden at Wisley, open in September. More from The Telegraph’s story:

The Duchess of Cambridge has turned her hand to being a Blue Peter presenter, as she joins the landmark television programme to lure Britain’s children outdoors with pond dipping and den building.

The programme will see the Duchess speak about the importance of outdoor play, confessing her own children Prince George, Princess Charlotte and Prince Louis are “dragged outside” come “rain or shine”.

A seven-and-a-half minute segment of the show, which is broadcast on CBBC, sees the Duchess introduced as a “gold Blue Peter badge-holder” before taking part in three outdoor activities children can try at home. The news was detailed on the Kensington Palace Instagram page tonight, along with a brief clip.

⛺️?? The Duchess of Cambridge has joined forces with @CBBC show Blue Peter, the longest running children’s TV programme in the world, to get stuck in with pond dipping, planting and team den building with local children and Blue Peter presenter @LindseyJRussell. Swipe to watch a preview of the show. The Duchess wants to highlight the benefits of the great outdoors and inspire children, families and communities to get back to nature. She is a strong advocate for the importance of early years and the positive impact that nature and the environment can have on childhood development. Our followers in the UK can tune in to watch the special film on @CBBC at 5.30pm on Thursday 13th June. #BluePeter

Blue Peter is the longest-running children’s TV program in the world, according to Kensington Palace. Below, the Duchess in a den built by the children as part of a contest. In the UK the program starts airing tomorrow at 5:3opm local time and runs through Tuesday, June 25. I checked Britbox to see if that service offers Blue Peter but did not see it on the program schedule.

This is not Kate’s first time on the Blue Peter show. Back in 2017 she and William were awarded a coveted Blue Peter gold badge. More via The Telegraph.

It is not the first time a member of the Royal Family has appeared on the show. In 2017, the Duke and Duchess of Cambridge were awarded a gold badge on the show for their campaigning work for mental health with Prince William joking that he would “compare” his with that given to his grandmother the Queen for her golden jubilee.

In the courtesy photos from the program, it looks like the Duchess might have taped this yesterday before the Cumbria engagements. She is wearing the same Troy London Tracker jacket, Kiki McDonough earrings, and shirt with distinctive pie crust collar that we saw for the Keswick visit and walkabout.  In the second photo, you can see she is in a pair of sneakers that appear to be another Superga style, the Cotu 2750 in a color called Sherwood Gum ($59). It is a distinctive look with the contrast of the vulcanized gum sole (thus its name) against the olive/khaki green of the shoe’s canvas upper.

In addition to the link above to the Superga site, the style is available in limited sizes at Amazon. Many thanks to Middleton Maven for another ID!

would like to see her wear some shorter dresses, for some reason I just am not in love with the "midi" ones. as for the shoes there must be some arcane shoe wear code for all the Royal Women of which we are not aware.

perfect. Kate looks beautiful as usual. It seems that shiny shoes are fasionable these days.

Stunning. Cannot see why anyone would not like it.

Love the dress, love the hair. Both look perfect on her

It has taken me a few days to sort out how I feel about this outfit.

Want to like the look, but I just can't. Agree with those who think the accessories and the dress just don't quite work together. With the zipper and the patterns in the knit, combined with the neckline and the activewear fit, this dress has a clean, sporty elegance, and I find the sparkly shoes and satin/sparkly bag distracting. I'd have preferred much plainer accessories that would let the dress shine on its own.

Also, while I love the dress, I think it should have been bespoke. It has two features that need to be placed just right to flatter a long, slender torso: the off-the shoulder neckline and the skirt that flares below the waist. In the case of The Duchess, I would love to see the flare higher up and neckline narrower.

All the same, she has the élan to pull it off.

This is a total miss for me. The dress seems to be sporty and the shoes too elegant. I agree with Mallory above....and yes Kate seems to put off most of her outfits!