For Kate’s visit to the Downton Abbey set the Duchess opted for a cream maternity coat by JoJo Maman Bebe. Kate is a fan of the hit series that airs on ITV in the UK and PBS in America.  It is a joint production of Carnival Films and Masterpiece.

The set is located at historic Ealing Studios in West London. More from Richard Palmer’s story in The Express:

Kate… went to Ealing Studios in west London to meet the cast and production staff of the period drama, one of Britain’s biggest cultural exports which is shown in 250 countries or territories around the world.

Many of the programme’s internal scenes are filmed at Ealing, home of a much-loved series of post-war British film comedies and more recent hits, but external shots and other scenes are recorded at Highclere Castle in Hampshire.

When she arrived Kate was presented with a bouquet by Zac Barker, one of two twin boys who play ‘George’ in the series. 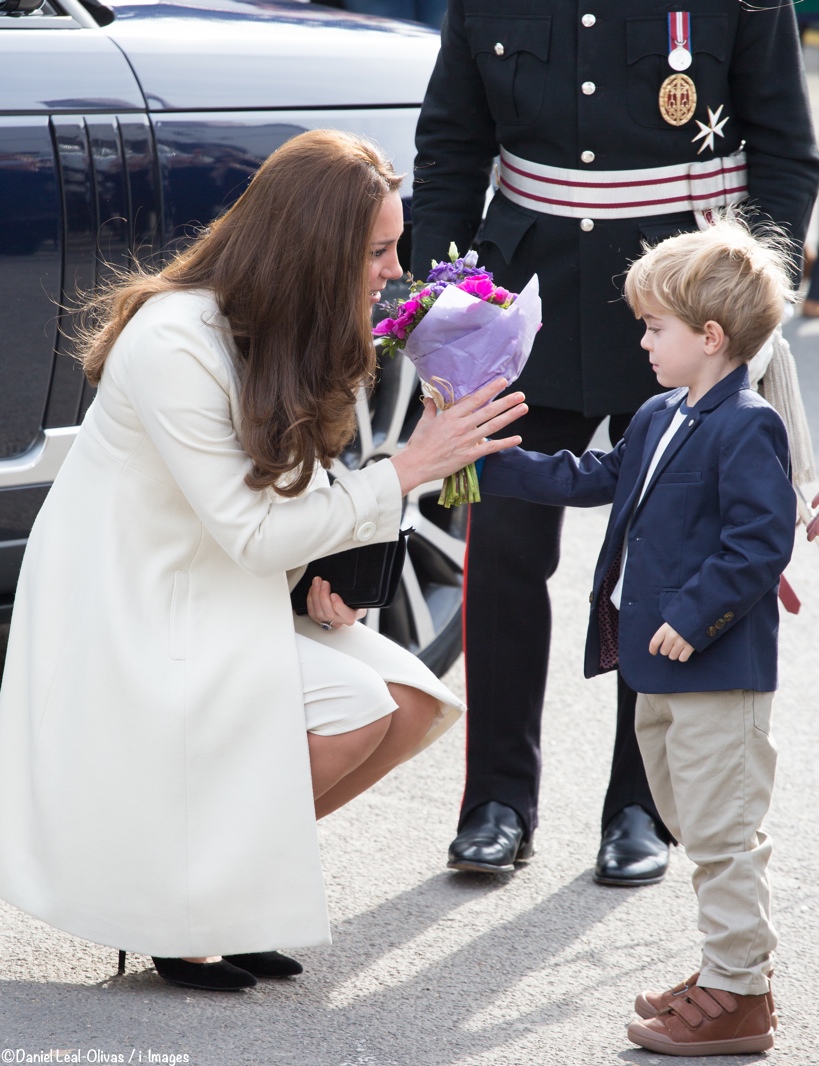 Below you see ‘George’ in a scene from the show’s Christmas special; the young man is held by his ‘mother,’ ‘Lady Mary Crawley’ (Michelle Dockery).

The show’s creator, Julian Fellowes, greeting Kate as she arrived. More from Rebecca English’s story in The Daily Mail:

Kate, who has less than six weeks to go before the birth of her second child, was greeted outside Ealing Studios by the drama’s clearly delighted creator Julian Fellowes.
Lord Fellowes is no stranger to royalty thanks to his wife, Lady Emma Kitchener, who is, co-incidentally, a lady-in-waiting to Princess Michael of Kent, who is a neighbour of Kate’s at Kensington Palace.

Unfortunately, the Duchess missed out on meeting Dame Maggie Smith who plays the Dowager Duchess of Grantham who had to cry off due to illness.

In addition to having a look at sets, makeup and other areas of production, the Duchess spent time with costume designer Anna Mary Scott and members of Ms. Scott’s staff.

She also chatted with cast members, including Jim Carter (l), who plays Mr. Carson on the hit series. Mr. Bates (Brendan Coyle) gave the Duchess an up-close look at the bells that would be rung by family members, summoning servants to work. Below, “Daisy” (Sophie McShera) and “Mrs. Patmore” (Lesley Nicol), along with a cake they presented to the Duchess. More about Kate’s time with the duo from Victoria Murphy’s story in The Mirror, the quotes are from Lesley Nicol:

“I showed her around the kitchen and all secrets behind it, such as how only one of the cupboard doors open – the rest of them are glued shut. “I don’t know who made that decision or why, but they did.

“I also told her the stories behind all the wonderful food you see on the show.

But did Daisy and Mrs. Patmore make the luscious looking cake? ITV has the answer:

The Duchess of Cambridge was presented with a cake by Downton Abbey cooks Mrs Patmore and Daisy on her visit to the show’s studios today, but the stars admitted they didn’t bake it themselves.

“Are you both fantastic cooks?” the Duchess asked actors Lesley Nicol and Sophie McShera on receiving the chocolate cake.”You wouldn’t want it if it was cooked by us,” joked Nicol.

A better look at the three women chatting.

For those of us who have been at our wit’s end, simply worried sick about the troubles of Thomas-the-footman, it’s good to see him (well, Robert James-Collier) laughing. Perhaps it had something to do with this?

In the hair and make-up department she met housekeeper Mrs Hughes, played by Phyllis Logan, as she was made up by artist Nic Collins, 44. She also met Robert James Collier, who plays under butler Thomas. He joked: ‘You’ve come just at the right time, Phyllis is about to have her Botox put in.’

That comes from the Daily Mail’s story.

As she was leaving Kate was given a present to take home to George. It was given to the Duchess by Oliver Barker, Zac’s twin brother.

It is a wooden train, better seen in this picture.

Kate wore a piece by JoJo Maman Bebe, the brand’s Princess Line Maternity Coat in cream. (The image below left is one I created in an effort to have a little bigger photo to view; I used two enlarged images, hopefully the proportions are correct.) It is described as a “Stunning coat to allow you to elegantly wrap up in cold weather.” More from JoJo Maman Bebe:

A great investment piece for your maternity wardrobe, our long cream princess coat will fit over your bump at every stage of your pregnancy. The wool-mix fabric gives it a luxurious, cosy feel to keep you warm this season.

A closer look at the garment as shown at Amazon. The coat is a 50% wool/50 rayon blend. It features a princess silhouette in a single-breasted style; other design elements include oversize buttons, on seam pockets, and tabs at the cuffs. It is also collarless. It is selling at Amazon (in the US at least) for $169. 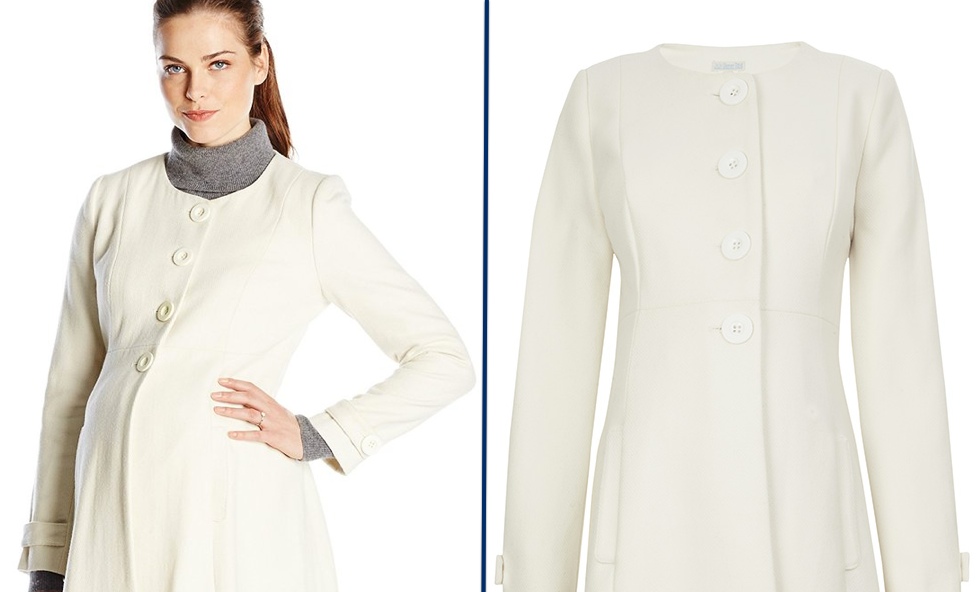 Amazon carries a solid collection of JoJo Maman Bebe womenswear. Shoppers will also find the label’s newborn styles, as well as a broad selection of girls and boys clothing. Additionally you can find some of the brand’s children’s wear at flash sale site Gilt.com

The Duchess wore a creamy white dress beneath her coat, but it’s not been identified. Today was one of those instances when Kate did not remove her coat once inside, understandable given she was on a set and also touring a sound stage, props area, and other chilly places. The most we can see of the dress is this portion covering her right knee, on the left of the photo. … and Mulberry Bayswater Clutch, shown in black leather below left. As you can see (hopefully) in the picture below right, Kate’s bag is black suede. Below, a quick video from 5News of Kate’s arrival.

We have two engagements to update you on:

Kate’s next engagement is tomorrow, when she and William join other senior royals at St. Paul’s for a Service of Commemoration honoring those who served in Afghanistan.

A quick reminder for anyone who hasn’t entered our our StyleRocks giveaway: time is running out to get in on the fun! You can any of the rings shown below, they’re all from the customizable jeweler’s Russian Rings collection. The winner gets to select their choice of gold(s) for their ring, and what they would like engraved on the rings. If you haven’t entered yet, this link takes you to our post about the giveaway.

Editor’s Note: I incorrectly said that Lily James, who plays ‘Rose’ in the series, was shown in the group photo. I was wrong, that is not the case; the post has been corrected. My thanks to Nat and Lisa for the heads-up.