How many remember this scene six years ago?!?

All of the new photos were taken by the Duchess of Cambridge. Two were shot in the garden at Kensington Palace, and the third was taken on holiday. The family is said to be vacationing on Mustique, and Emily Andrews reports that is where the picture of George in the green polo shirt was taken.

More about the photos from this Telegraph story:

In one of the images – all taken by his mother the Duchess of Cambridge – George is laughing, his eyes screwed up in joy.  A gap in his bottom row of teeth, where he has lost a milk tooth, emphasises the sense that at heart this is just a normal little lad having a jolly fun time in front of the camera. UPDATE JULY 22: Here is an additional photo from the polo July 10, shared in honor of George’s birthday today on Twitter. Posted by the Army in London, in the lower left corner, you see Domhnall, the mascot of The Irish Guards. George has been busy since last July. He was a page boy at two weddings. Below you see him at the August wedding of  Sophie Carter; the bride is one of Kate’s close friends.

And here you see both Charlotte and George at Princess Eugenie’s October 2018 wedding. The next time we saw an official picture of George was when images marking Prince Charles’s 70th birthday were released. We saw another family photo in December, this one used for the Cambridge’s Christmas card.

We had just a glimpse of the Prince as the family arrived for the Queen’s annual Christmas luncheon at Buckingham Palace. This spring we were all delighted by wonderful photos of all three Cambridge children as they explored the Back to Nature Garden at the Chelsea Flower Show, a project the Duchess worked on for months. A little more than a month ago we saw the trio again at Trooping the Colour. George taking an early look at the Buckingham Palace crowds. And just ten days ago we saw Prince George at a charity polo match, along with Princess Charlotte and Prince Louis. 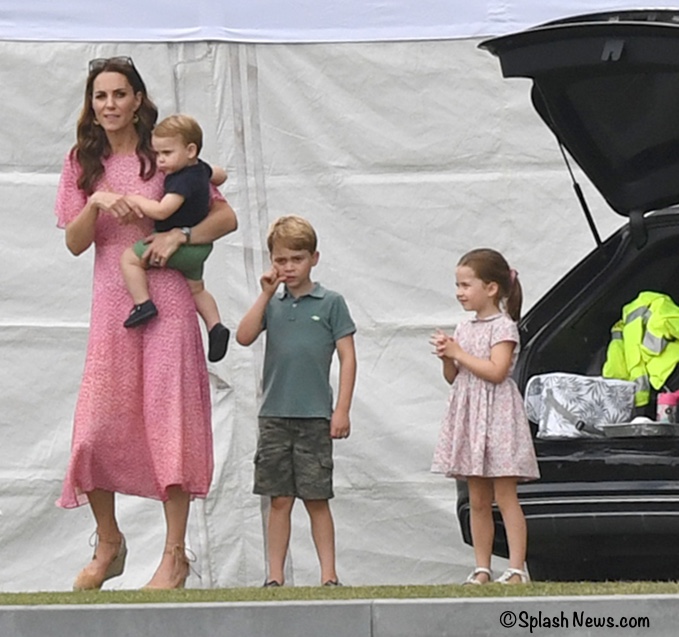 And goodness, how he has grown.

It is a delight to see Prince George growing up!

For details on what George is wearing, visit our What Kate’s Kids Wore post.

The Duchess really does take the most beautiful photographs of her children. She always manages to pull out the best in their little personalities. It seems like yesterday that we heard little George was born, yet it's been six years!

George is a handsome little guy. And so tall already!

What a delightful post! Thank you. It is so great to see how he has grown and changed. The Middleton gene certainly is strong in all the children. A very handsome bunch. It will be so fun to see how they all navigate their lives. Happy Birthday Prince George!

My how time flies! It's also amazing to me that just in the last few months, little George seems to have sprouted like a weed!

He's really stretching out, isn't he? It's so cool when kids start losing that chubby baby/toddler look and begin to look like grown children. I love those laughing photos. He seems fully into it. I wonder if someone was tickling him or if she just caught him having a good laugh. Either way, it was a good get by the photographer! Well done DoC!