We are back with our third and final poll on Kate’s maternity styles.

Before we start that portion of the post, a quick update on things at the Lindo Wing of St. Mary’s from our friend Mark Stewart (@RegalEyes), a locale he has dubbed “Camp Kate”. First and foremost, it is hot: 85°+ in London. Today and Thursday are supposed to be even warmer. The “Great Kate Wait” is a term resonating with media and civilians alike, that one comes via Paul Harrison of Sky News.

Silly Season has clearly arrived at St. Mary’s. There is an increasingly wacky parade of odd characters, hangers-on, promoters and lookalikes engaged in a variety of behaviors. This morning it was a Prince Harry lookalike accompanied by a teddy bear. The media has little else to shoot, the lookalike & bear get facetime. After the requisite photo in front of the Lindo Wing, this duo moved on to Buckingham Palace. Kate is said to have spent the weekend at her parents home in Bucklebury, William played polo nearby on both Saturday & Sunday, more from Sunday’s Mirror:

Initially, Wills was in two minds over whether to play and volunteered to go to Bucklebury instead.

But Kate persuaded him he should continue with his plans, which he’d agreed to last year long before he knew Kate was pregnant with their first child.

The matches were at Cirencester Park Polo Club, below we see William smiling at a little one just before the match got underway Discussion and debate over the wee royal’s arrival continues to fill the media. Over the weekend more US news anchors made the journey to London, more from Brian Stelter in the NY Times:

NBC and ABC, on the other hand, are sending over anchors. The “Today” news reader Natalie Morales flew to London on Sunday. The “Good Morning America” weekend anchor Bianna Golodryga has been there for nearly a week, and she will be joined sometime soon by a regular on the weekday edition, Amy Robach.

Martha MacCullum of Fox News and other on-air talent also made the trip to London this weekend.  For anyone at the hospital who struggles with the difference in London time and Eastern time, two clocks are now set up on the NBC News pillar, as seen in this photo from Paul Harrison. The bigger news is that yesterday’s Daily Mail carried a story from Rebecca English noting something that the Duchess of Cornwall shared: “Camilla told crowd in Cornwall that royal baby is expected this week”

As she gave an impromptu speech to the assembled guests, she said: ‘We are all just waiting by the telephone. We are hopeful that by the end of the week he or she will be here.’

As you can imagine, this little tidbit is making headlines in papers other than the Mail, this is the front page of  the Daily Express today. A final note, we want to send out congratulations to Victoria Murphy of the Daily Mirror. Some may recall that Victoria, who is the Mirror’s royal reporter, discovered she was pregnant around the same time Kate did. On Saturday Victoria delivered Isobel Aoife. Moving on to our final poll, we begin with Kate’s April engagements.

For the couple’s visit to Scotland Kate wore the Workers Coat by Moloh for the first day of the trip, seen below when arriving at the Emirates Arena in Glasgow with William on April 4. The next day saw a return of the red Armani coat first noted at William’s passing out ceremony from Sandhurst back in 2006; the button at the waist was moved a touch to allow more room. She accessorized with the Strathearn Tartan scarf seen at the Jubilee River Pageant and the Order of the Thistle  When in Scotland Kate’s official tartan is the Countess of Strathearn. We saw a new coat on Kate for the annual Scouts Parade at Windsor Castle, the Frayed Coat in mint tweed by Mulberry, along with her Whiteley Cappuccino beret-style hat. When visiting the Willows School in Manchester Kate returned to another favored designer, Erdem, wearing the Sophia dress. April 24th Kate wore an icy blue Emila Wickstead dress for an Art Room event at the National Portrait Gallery, a customized version of the this year’s “CZ dress”. All Photos by Splash News

Later in April the Duchess visited the Warner Brothers Studios wearing a polka-dotted Topshop frock and black Ralph Lauren jacket. For an engagement at Naomi House children’s hospice Kate selected a peach coat by Tara Jarmon atop a dress by “an independent dressmaker”. Kate had fewer engagements in May. She repeated the Topshop dress seen just above at the wedding of William van Cutsem and Rosie Ruck Keene on the 11th. For one of the Queen’s garden parties at Buckingham Palace we saw a new piece by Emilia Wickstead, the Jane Corbett hat, and the oft-carried Park Avenue clutch by Russell & Bromley. In June Kate wore a new ensemble by Jenny Packham for the church service honoring the 60th anniversary of the Queen’s coronation. The hat may look familiar, it is the same worn to last year’s Jubilee Service of Thanksgiving. The ceremony officially christening the Royal Princess ship was a bit of a departure for Kate, she wore an animal print dress by Hobbs, the Dalmatian Print Mac. Kate went with Alexander McQueen for her final formal appearance at Trooping the Colour, a pink coat featuring a wide collar and oversized pearl buttons. 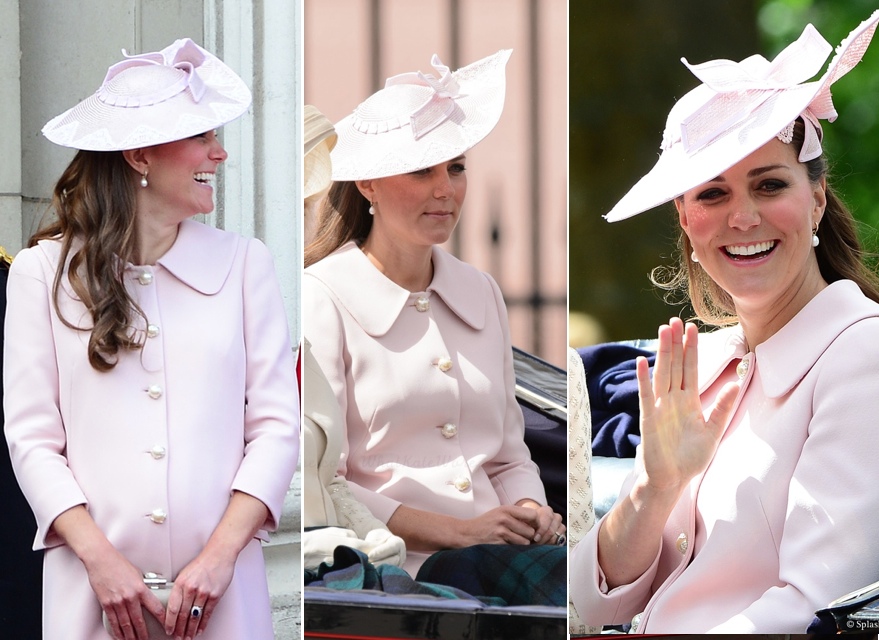 We have an interesting dilemma for this poll: there were several occasions in this last trimester when Kate was photographed but photos of these events are very poor quality, or completely unavailable via the agencies I use for licensing. So I am doing these in a separate poll, with links to the sites that have licensed photographs. Without further verbiage, here is our first poll.

And here is our second poll.

Hello Writer and Readers of "What Kate Wore",

I am in London, so have posted a special post on my blog about William and Kate and some up-to-date news from outside Lindo Wing! www.emilyroseschiller.blogspot.com - post "Prince William and Duchess Catherine's Royal Prince or Princess."

Yes. It definitely is silly season! But Kate looked lovely throughout her pregnancy -- I can't think of a single celebrity who looked as beautiful and chic when she was expecting.

I send my very best wishes to Kate and her family and hope she and William will soon have a healthy, little princess or prince.

Poor Kate! I hope its not too crazy when she goes into labour, it must be stressful enough without all the press as well!

Kate looked outstanding during her third trimester. There were three outfits which were all home runs for me: the peach Tara Jarmon coat, the Topshop polka dot dress, and the Dalmation print dress. She did a great job choosing maternity styles that were classy but never frumpy. All the best to her in the coming days!